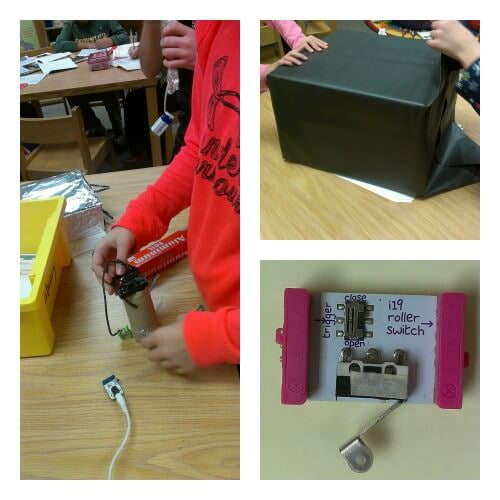 Flute playing machine in the making, a panda robot body, and the semi-repaired Roller Switch

The makerspace projects that students have been working on are really coming along.

There’s a flute-playing machine, a “deadly” panda-bot, and a cat that waves its tail in the making for this round!  I love that the projects are so creative and students are helping each other solve problems they run into.

On the whole, most students are also taking care of the littleBits.  I have to admit I was worried, because we have over 100 5th graders using them, and I can’t (and shouldn’t have to) monitor the makerspace center all the time.  They LOVE making circuits, and trying new Bits to see what they can do!  More often than not, they start creating huge monster circuits before finishing the 101 cards.  Beginning next week, I’m going to introduce the projects to all the classes, and I’m really looking forward to what they come up with.

One of the Bits, however, has been damaged already.  The little metal “arm” on the Roller Switch was just snapped off when a student opened the box the other day. I put some masking tape on it temporarily, and later I super-glued it.  So far, so good.  I have to admit that I thought the Roller Switch would be one of the first to break, too.  The protruding metal arm bends the wrong way FAR too easily.

Some teacher-librarians might think damage to and maintenance of materials is a good reason not to have a makerspace.  I disagree.  I think there needs to be accountability, but we can’t be so afraid of damage that we stunt the learning process.  I learned that lesson with the Nooks ereaders.  Prices on tech usually go down anyway, so why worry about it?

My response to the classes was to pull the broken Bit until I could fix it, and I said something during the next round of classes about taking better care.  I explained that if the damage continues, we won’t be able to use the littleBits anymore.  I hate to do that, but I will stick by my decision if the material damage becomes habitual and intentional.  Overall, though, I’ve been impressed and pleased with the students’ learning and problem solving skills as they use the littleBits makerspace center.